Fatbergs: Why You Shouldn’t Pour Grease Down Your Drain

You’ve probably been warned not to pour bacon grease or cooking oil down your drains, but do you know why?

Fats, oils, and grease from cooking often go down your drains as liquids, but then solidify as they travel down the drain.

And that creates a number of problems...

3 problems with pouring grease down your drain

Grease congeals (a fancy word for turning into a solid) in your pipes the same way plaque builds up in your arteries. The buildup narrows your drain, causing it to clog frequently. 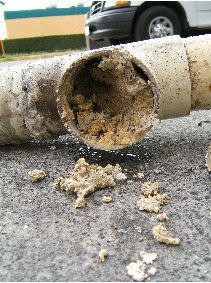 A drain line clogged by oil, fats, and grease. Via Cease the Grease.

Even if the grease makes its way through your home’s plumbing, it can cause huge problems in the city’s sewer lines.

According to this study, the fatty acids in the cooking oils combine with calcium and collect on the top of sewer lines when the sewer level rises. This creates ‘fatbergs’, or stalactites made of fat.

And fatbergs can get huge. In London, they had to remove a 16-ton fatberg that had reduced the sewer line to just 5% of its capacity 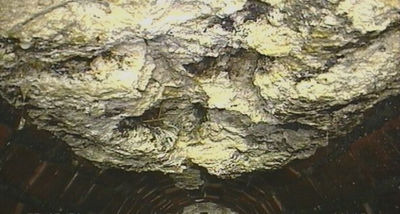 Image courtesy of CountyClean via the Thames Water

Gordon Hailwood, waste contracts supervisor for Thames Water, said “If we hadn’t discovered it in time, raw sewage could have started spurting out of manholes.”

Which brings us to the last problem...

It’s estimated that 47% of the 10,350-36,000 sewer overflows in the US (United States) each year are caused by oil buildup in sewers. When a sanitary sewer overflows, sewer water can make its way into streams, rivers, and groundwater, tainting our drinking water supply.

How to properly dispose of grease

For small amounts of grease

If you lightly greased a pan before cooking, wipe the pan down with paper towels. Throw the towels in the garbage and then wash the pan like normal.

For medium amounts of grease

When cooking meat like bacon or ground beef, you’ll be left with a little bit of standing grease in the pan. Pour the grease into a heat-safe container. Let the oil solidify and then put it in the garbage.

Wipe the remaining grease from the pan(s) with paper towels and throw the paper towels out before washing the pans.

For large amounts of grease

If you’re frying something (like a turkey), you’ll have quite a bit more grease. Do the same as above, but collect the grease in a larger container (1-2 gallons) and drop it off at an oil recycling location.

Most cities or counties have special recycling locations for homeowners to get rid of cooking oil. Not only does this keep the fats, oils and grease out of your pipes and the sewer, but these recycling locations can actually turn the grease into biodiesel fuel.