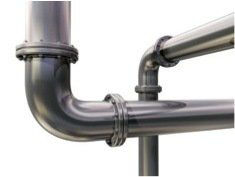 Got an old (60+ years) house? Those pipes aren’t going to last forever. At some point they’ll start to leak due to corrosion and rust.

Worst case scenario: the leaky pipes burst, causing a flood that costs thousands in damage to your home and belongings.

Of course, re-piping an entire home is expensive. So, you only want to have this job when it's absolutely necessary.

Here are the warning signs that your home needs new plumbing.

The rust color is caused by corrosion in the pipes, signaling they need to be replaced.

2) Signs of corrosion on the pipe tubing

Assuming all your pipes are the same age, having several leaky pipes is a sign you’ll need new plumbing because it’s likely only a matter of time before the rest of your plumbing starts to leak, causing damage to your home.

4) High lead content in the water due to lead piping

Lead piping is found in homes built before 1986. Corroded lead pipes will leach lead into your tap water, according to the EPA.

Lead content in drinking water can cause several adverse effects in children, like delays in physical and mental development. For adults, it can cause high blood pressure and kidney problems.

Lead pipes are a dull grey in color and are easily scratched. If you have lead pipes, get your water tested for lead content.

The U.S Department of Housing and Urban Development suggests replacing the pipes if the lead content in your water exceeds 50 parts per billion (0.05 ppm).

Turn on your hot water. Is the water pressure low? This can be caused by:

When is the best time to get new plumbing?

That’s between you and your plumber. But one of the best times is when you’re remodeling the home and the pipes are already exposed. See more on the cost of remodeling your bathroom.